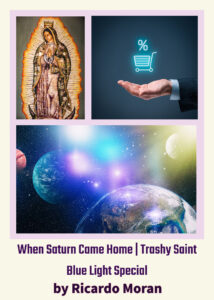 He knew I could no longer live in my skin. My feelings
for the body, for the soul of that boy
forced Saturn to descend from the heavens.

But when Saturn tried to come home
on that June night
he got detained at the border,
rescuing my heart from that boy
who had held it in a Loteria card,
and who, with his eyes closed, had lost it in a wager.

And seeing no other way, Saturn found an opening
in the fence, hid his brilliance,
and tumbled into my backyard.

In his embrace, my face
pressed against his warm chest,
quenching his loneliness
with my tears. He lifted my head,
tending to my broken rings, their ends
had seared the earth,
while his breath deflected the shrill voices
who claimed dominion over the holy cosmos.

His hand reached for my fingers
for he needed me just as much
as I needed him. He hurled parts of his rings
to dance, circle, and protect me
until I could ascend the heavens on my own,
until my skin was no longer alien to me.

And with that, Saturn sat with me in the darkness.
Not letting go, he held me as I sobbed,
so I would not collapse into the earth,
so that my world became mine again.

He approaches the altar
and swipes the chalice
because God has the day off
but miracles still need to happen.

Outside, smoking a joint,
he waits at the curb for his ride,
scowling at businessmen,
scratching his balls.

His stubble is thick,
and he counts the wrinkled bills
won in last night’s bet.
The shadow from his red cap
softens his eye to a muted purple.

His ride cruises up the street.
Cobalt Blue. Heavy rims.
With an airplane engine
thrusting the car up,
like a parishioner
pleading to God.

The scantily clad woman
painted on the hood
as a reminder
that even saints are human.

There are miracles to perform today
that only Freon
and a wrench
can do. What a chalice cannot,
what a prayer
can only pretend to touch.

His fingers release the empty cup,
falling
like a lotto ticket
that no one can use.

This flat, heat-soaked town
has a blue light,
that spins in a store.

Perched on a silver pole,
fused to a silver cart,
It looks like it could take me
to the future,
but it just sits there.

And in 1981,
I knew of no one like me
who cringed
when he held hands with a girl.

And I didn’t know
I had the right to say no.

As this blue light turns, it draws shoppers
to trinkets in bins, to stacked bedsheets,
their eyes fixed on plastic utensils.

So, I pick up a pack of men’s briefs
because I was 10
and that’s all there was.

My hand traces the smiling white man.
“Does he like boys?”

Staring at his picture, I wonder,
“How long before
I can leave this place
and smile
in a photo like him?”
Or with him,
holding his hand.

Can I hang on?

Can this spinning blue light
save me until then? 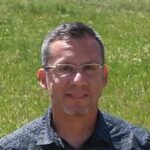 Ricardo Moran was one of 12 finalists in the We Need Diverse Books picture book contest in 2017. In 2020, he received the Peter K. Hixson Memorial Award for Poetry. Additionally, he sits on the board of the San Diego Writers Ink, and is also a member of the Nebraska Writers Guild where he often communes with the spirit of Willa Cather at Red Cloud. You can find him at: www.ricardomoranwriter.com