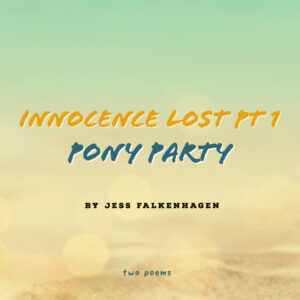 perversely proud of the near complete annihilation

reality was a tarp that up and billowed away

Acre upon acre of pain
field upon field of grief

The final child is turning 6.
It is a pony party.
Up on the ridge, the mother leads the horse through the waist-high clumps of sage.
While, at that very moment,
he has his hand on the trigger.
His finger hovers over the detonator,
a maniacal gleam,
not only self immolation,
he is going to take them all down with him.
And the children will be forced to drag their lost limbs into adulthood with them.

But the pony walks steadily and the cake is frosted.
The mother swallows the knife.
The children continue,
blissfully unaware, which is, of course,
all that matters.

Jess Falkenhagen lives with her husband and 4 children in an old adobe house at the foot of the Sangre de Cristo Mountains in Northern New Mexico. She has a background in Cultural Anthropology and reads an enormous quantity of memoir, travel literature, ethnography and poetry. She has been to 41 countries and has been proudly social media free since 1973.