When they moved her down the stairwell
Step by step, halting and panting, on a stretcher,
The pavement was heated up by then.

Jimmy was playing the lonesome blues somewhere.
A note from the wayward sax kept rolling down
As she moaned in pain—
A sharp stab at the edge of her rib cage
That holds at bay a mottled liver,
An estranged spleen
And a love-struck heart as well, for years.

When she was lifted into the ambulance
Droplets of sweat clustered around the lids,
The street empty of desire,

The howling of blue wind made her lips crack
And as she entered the ER with sunken cheeks
And half-closed eyes, she wanted two things dearly,

A sip of cold white rum
And Jimmy playing Leroy Carr—
“How long, how long has every train been gone?”

A FERRY RIDE ON THE CIRCLE LINE

Far more sweetsounding than a lyre 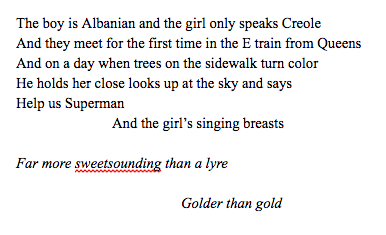 POET AND THE PREGNANT WOMAN

Across from the Plaza Hotel
Where a bronze horse leaps into air
A boy in blue jeans maps the sky.

Lifting up their rears
Black ants take shelter
Under pages of the New York Post,
On its top a homeless man darkens the cloud.

Soon it will rain.
A very pregnant woman
Flaunts her belly swollen as Hudson Bay
And waits for the light to change,
So also a poet,
Who does not have to cross
This street or any street for that matter—
Waits for words to rain
In thunderous silence
That will run wild and naked
Through their veins
Giving birth to another Apollinaire.

At Ferry’s Landing—
Cranks of machines cracking marrows
Of American lindens
Fill the air
And at Ground Zero, the eternal digging.

No one knows
Who tends the cattle in Ithaca
Or who serves coffee in the downtown Starbucks
At these hours,
When wind is still as a stroke victim.

The soggy September trench coat
Folded as memory of troubadours
Left close to the street sign bent backward
And a stench pooled around the hydrant.

Walking into the troubled night
Under a traffic-less sky,
I notice on dank pavement a half-rotted root
Sinking its teeth into the marrow of Manhattan.

Biman Roy has been writing poetry for past three decades and has been published in various literary journals in US, UK, Canada and India. These poems are taken from his manuscript, “Geography Of Bliss”, a collection of poems based on his interactions/reflections/interpretations of New York City, both as a physical and mental space/entity.