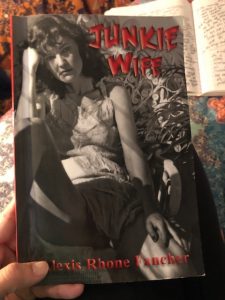 From the collection’s dedication page, which ominously states, “No names were changed. No one was innocent,” to its last line, Junkie Wife, written by Alexis Rhone Fancher, tactfully illustrates the affects addiction has on an individual, as well as the relationships it inadvertently creates.

In “Flirting with Death—A Love Poem,” Fancher begins with the phrase, “In love with the rush. Not the high,” which establishes a stark, matter-of-fact approach to a life lived on the fringes of society. By using colloquial language laced with blunt, in-your-face imagery, Fancher successfully portrays a set of multifaceted characters that, for the most part, remain anonymous. The one to whom we can only assume is the “junkie wife,” is never directly named, nor is the child prostitute, or the Armenian drug dealer, or the lovers on the beach. Vicki, the main character’s former best friend whose “blood [later] splattered the bone white walls like a Pollack,” and Dr. Tim, who tells the main character she “looks like a million bucks,” even as she fingers a razor blade in her pocket, serve as intrusions to the main character’s drug-induced haze, and remind readers of the blurred reality in which she is living.

Nowhere in Junkie Wife is there an excess of words. Each line is intentional, and takes the reader on a fast-paced downward spiral of self-destruction. Perhaps one of the most symbolic pieces of poetry is “Divorce Court Barbie (Ken Drives Away With All My Things).” In this piece, the main character essentially summarizes the exploits of her marriage, using tongue-in-cheek descriptions for herself such as “Bad Luck Barbie” and “The one Ken swears he wouldn’t love if I were the last Girl on Earth Barbie.” By comparing Mattel’s iconic Barbie with the bleak realities of her character’s shattered life, Fancher makes a statement about the unrealistic narratives women are taught as children, as well as makes reference to her characters inability to ignore these stereotypes with which she compares herself.

Junkie Wife is as addicting as it is honest. Fancher’s minimalistic style and slice-of-life formatting leave readers wanting more, her words a drug, in and of themselves.