On the ladder of the earth, I clambered
through the atrocious thicket of forsaken forests
up to you, Machu Picchu.

Lofty city of stone stairways,
finally a dwelling where the terrestrial being
did not hide in her nightclothes.
In you, as in two parallel lineages,
the cradle of lightning and that of man
rocked together in the bristling wind.

Mother of stone, spindrift of the condors.

High reef of the human aurora.

This was the dwelling, this is the place:
Here the large grains of maize swelled
and fell again like roseate hail.

Here the golden wool of the vicuña was spun
to cover the loved ones, the barrows, the mothers,
the king, the worshippers, the warriors.

Here the feet of man found rest by night,
beside the talons of the eagle in the high
meat-strewn aeries, and at dawn
they stepped thunder-shod through the rarefied fog
and touched the soil and the stones
until they recognized them in the night or in death.

I gaze at the rags and the hands,
the trickle of water in the sonorous hollow,
the wall softened by the touch of a face
that with my eyes gazed at the earthly lanterns,
that with my hands oiled the vanished
planks: Because everything—clothing, skin, pots,
words, wine, loaves—
was gone, fallen to earth.

And the air entered with its orange-blossom fingers
over all the sleeping dead:
a thousand years of air—months, weeks of air—
of azure wind, of iron cordillera,
that were like soft hurricanes of footfalls
polishing this solitary precinct of the rock.

WHAT ENDURES
-After Neruda

Oh you dead of the lone abysm, shadows of one chasm,
of such depth, as if rising to the measure
of your magnitude—
the true, the most consuming
death, and from the quarried rocks,
from the scarlet turrets,
from the staggered stairways of the aqueducts,
you tumbled down as in the autumn
of a single death.
Today the hollow air no longer cries,
no longer acquainted with your feet of clay;
the pitchers that filtered the firmament
when the blades of a sunburst spilled forth
are already forgotten,
and the mighty tree was swallowed
by fog, struck down by gusts.

Suddenly, from the highest summits, the hand
that it held up toppled
to the end of time.
You are gone now, spidery fingers, delicate
filaments, interwoven mesh;
all that you were has dropped away: customs, unraveled
syllables, masks of resplendent light.

But there was a permanence of stone and word:
The city, like a cup, was uplifted in the hands
of all—the quick, the dead, the silenced—sustained
by so much death, a wall; out of so much life, a hard blow
of stone petals; the sempiternal rose, the traveler’s abode,
this Andean breakwater of glacial colonies.

When the clay-colored hand
turned to clay; when the diminutive eyelids closed,
crammed with coarse walls, crowded with castles,
and when the whole of man lay ensnared in his small hole,
exactitude remained there waving like a flag:
the high site of the human dawn.
The loftiest vessel ever to contain the silence;
a life of stone after so many lives.

CLIMB UP WITH ME, AMERICAN LOVE
-After Neruda

Kiss the secret stones with me.
The torrential silver of Urubamba
sends pollen flying to its yellow cup.

Emptiness flies from the creeping vine,
the petrified plant, the hardened garland,
over the silence of the mountain coffin.
Come, miniscule life, between the wings
of the earth while—cold and crystalline in the pounded air,
extracting battered emeralds—
wild water, you gush down from the snow.

Love, love, until the sudden night,
from the reverberant Andean flint
down to the red knees of the dawn,
contemplates the blind child of the snow.

Willkamayu of resonant threads,
when you whip your linear thunder
into white foam like wounded snow,
when your precipitous storm winds
sing and flagellate, waking up the sky,
what language do you bring to the ear
hardly uprooted from your Andean froth?

Who seized the lightning from the cold
and left it chained in the heights
divided into glacial tears,
shaken into choppy rapids,
striking its embattled stamens,
carried on its warrior bed,
bound to its rock-tumbled finality?

What do your injured flashes say?
Your secret rebel lightning:
Did it once travel thronged with words?
Who keeps smashing gelid syllables,
black languages, gold banners,
fathomless mouths, muffled cries,
in your tenuous arterial waters?

Who goes reaping floral eyelids
that arise from the earth to gaze?
Who hurls down the dead clusters
that dropped into your cascading hands
to thresh their threshed night
into geologic coal?

Who flings down the linking branch?
Who again entombs the last goodbyes?

Love: Don’t touch the border,
don’t worship the sunken head:
Let time fulfill its high stature
in its salon of broken fountains,
and between quick water and the great walls,
gather the air from the narrow pass,
the parallel plates of the wind,
the blind channel of the cordilleras,
the crude greeting of the dew,
and climb, flower after flower, through the thicket,
treading on the serpent hurled from the cliff.

In this precipitous region of crag and forest,
green stardust, clear jungle,
the Mantaro valley explodes like a living lake
or like a fresh level of silence.

Come to my very own being, to my dawn,
up to the crowning solitudes.
The dead dominion still lives.

And over the sundial, like a black ship,
the predatory shadow of the condor crosses.

THROUGH ME
-After Neruda

Rise up to be born with me, my brother.

Look at me from the depths of the earth,
farm laborer, weaver, silent shepherd,
keeper of the tutelary guanacos,
mason of the faithless scaffold,
water-carrier of Andean tears,
lapidary with well-worn fingers,
farmer trembling over the seed,
potter fallen into your own clay,
bring your ancient buried sorrows
to the cup of this new life.
Show me your blood and your furrow;
tell me: Here I was whipped
because the gem didn’t sparkle or the earth
didn’t yield the stone or the grain on time.
Point out to me the rock on which you fell
and the wood on which they crucified you;
spark up the old flints for me,
the old lamps, the whip-lashes stuck
to your wounds across the centuries,
and the axes with their glitter of brilliant blood.
I come to speak for your dead mouth.
Across the earth, unite
all the silent wasted lips,
and from the depths speak to me this whole night long
as if I were anchored here with you.
Tell me everything, chain by chain,
link by link, and step by step,
sharpen the knives you kept below,
thrust them in my chest and in my hand
like a river of flashing yellow rapids,
like a river of buried jaguars,
and let me weep: hours, days, years,
blind ages, stellar centuries.

Hasten to my veins and to my mouth.

Speak through my words and my blood. 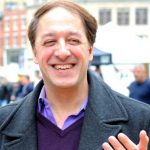 volume Cooking with the Muse (Tupelo, 2016) won the Eric Hoffer Book Award, the IAN Book of the Year Award, and several others. Previous poetry books include the The Plague Doctor in His Hull-Shaped Hat (an SFASU Press Prize selection); Forty Floors from Yesterday (winner of the Bordighera/CUNY Prize); Later on Aiaia (winner of the Grolier Poetry Prize); and a critical study of myth in modern poetry. He has recent work in hundreds of publications ranging from Agni to Poetry Daily. Massimilla holds an M.F.A. and a Ph.D. from Columbia University and teaches at Columbia University and The New School. For more info: www.stephenmassimilla.com and www.cookingwiththemuse.com