The Afterlife
by Lena Zaghmouri

It shouldn’t have surprised Kareem that his friend and former neighbor, Faris, had a heart attack last night. Kareem didn’t know much about his health, but Faris was over seventy and had just endured a trying decade: caring for a mentally ill brother and a mother undergoing chemotherapy and radiation treatments.

The manic outbursts from Faris’ brother and the pained ones from his mother often frightened Kareem’s young children. At night and during the day. The three of them would huddle under the tables or in their parents’ bed when a gut-wrenching cry or a blaring fit would break through the walls.

Kareem imagined that those outbursts must have frightened them more now that he didn’t live at home anymore, but they never mentioned anything during the weekends they spent at his two bedroom apartment.

But now they wouldn’t be scared anymore: Faris’ mother had passed a few months ago, and his brother would have to be sent to an institution because there was no family left to care for him.

And there was no family fit to perform the ghusl, or cleansing, of Faris’ body before his burial.

So the imam offered the honor to Kareem, who accepted dutifully.

He called in to work and met with the imam a few hours before in his small office at the mosque. Kareem tried his hardest to keep his hands folded and his feet still while they spoke. He hadn’t been in the mosque much in the four months since his wife changed the locks and threw his belongings on the front lawn; he figured it was best to let people discuss his broken home without fear that he would walk up and interrupt their conversations.

“Faris was your good friend?” the imam asked hesitantly as if it that was the uncomfortable matter to broach.

Kareem nodded. “Yes, of course.” But he wasn’t so sure he would define his connection to Faris that way; Kareem had only moved to this town two years ago to begin his career as a pharmacist. Faris’ house was the only one with more tension and resentment than Kareem’s, whose marriage had begun to disintegrate well before he had moved his family here, and the two men often used Kareem’s garage as a short respite from their homes. Faris had been a mechanic before he retired, and he would tinker with the engine of Kareem’s car while they discussed things like politics and their adolescent years back home in Palestine, which had been separated by a full generation. Anything but the lives they had right now.

The imam suggested they begin the ghusl soon; the funeral would only be in a few hours. He stood and led Kareem down the corridor to a separate room. “We’ll wash him together,” the imam promised as he opened the door to the room that held Faris’ body.

Kareem braced himself before looking so that he wouldn’t gasp or choke. He had seen many dead bodies in his childhood and early adult years back in Palestine, but it was a crushing experience each time. Besides, his fifteen years in the United States had softened him to such things; the threat of death was so much fainter here than it was back home.

But seeing Faris’ body wasn’t as horrifying as those he saw in the rubble back home who were often bloodied, mangled, and so young. Faris’ skin now was a slightly paler gray than his eyebrows and chest hair, but some of the lines on his forehead and around his mouth seemed to have disappeared, making him look closer to Kareem’s age than his own.

The imam wasn’t as serene, though. He stood more than two feet away from Faris’ body, and the color had drained from his smooth face. “I’ll let you do this,” he said as he rushed out. “Brother Faris would want a friend to do this.”

Kareem never thought that washing an adult body could take so much time and energy. It was different than bathing his children, who were squirmy as babies and loved to splash the water all over him and the bathroom floor; Faris’ limbs were still and heavy, and his skin was so thick and tough that it seemed like no amount of soap and water could clean it. Once Kareem had dried him off and wrapped him in a white cloth, the muscles in his arms and back burned from the effort of maneuvering Faris’ weight.

The imam had returned by then, his solemn composure regained, and offered Kareem a seat in a small folding chair next to the table that held Faris’ body. He took it, slumped and quietly panting. “Faris is with Allah, brother,” the imam said with his hand on Kareem’s shoulder. “You must make wudu to be clean before God.”

Kareem dragged himself up the flight of stairs to the washing sinks in the men’s bathroom. He scrubbed his hands, feet, and calves intensely, noticing how much lighter live flesh felt in his grip.

He inhaled deeply as he filled his cupped hands from the faucet, drinking in the air around him, and he only faintly felt the tears falling from his eyes when he doused his face with the warm water. 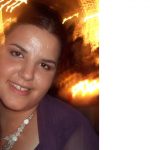 is a fiction writer.

Lena Zaghmouri’s writing has been published in Sinister Guru, KNOT Magazine, The San Joaquin Review, and Sukoon. She has also been nominated for the Pushcart Prize for her story “Al Walad” and was shortlisted for the OWT Fiction Prize; she has pieces forthcoming in Pulp Literature and First Wednesday Journal. She is currently working on her first novel.