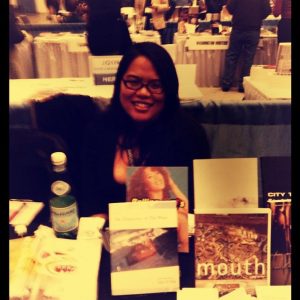 Cherisse Yanit Nadal is a recipient of PAWA, Inc.’s Manuel G. Flores Prize in Writing, is a 2013 VONA Fellow, and attended the UCR Palm Desert Low-Residency MFA program. Her work has been published in Oatmeal Magazine and has been a featured reader at Dirty Laundry Lit, Sunday Jump, Shades & Shadows, and Tuesday Night Cafe. She is a former West Coast Correspondent for DC Asian Pacific American Film, Inc. and has also served two years as Acquisitions Editor at Kaya Press. Previous to assuming her position as Editor-in-Chief of The East Jasmine Review, she served as one of the Non-Fiction Editors. Cherisse has also been featured as a guest co-host on the literary podcast The Blood-Jet Writing Hour. She can often be found singing behind her steering wheel on any number of L.A. freeways. She one-ups Queen Bey by adding tea and chia to the hot sauce in her bag… swag. You can follow her on twitter @cherisseyanit.