A Saturday afternoon. I was running up and down a court with girls from my high school basketball team. It felt good to be there, on a court in our small town’s Mormon temple’s open gym. But we could feel the end too. Graduation was right around the corner, and after years of playing hoops together, we knew this could be our last chance to share a court. We didn’t let them break the girls up. We knew how pick up games worked. Most of the time guys ignore girls on their teams, never pass to you or let you bring the ball up the court. They probably thought we’d be easy prey, so when we said we wanted to play together, they agreed.

Most of the other players were LDS men, elders, and there were a couple of younger guys, boys we knew from high school, like Robert. He and I had gone to middle school together, had been two of the best basketball players back then. We were also both half Asian. His mom was Polynesian, my dad was Japanese American, and when we dated at the end of eighth grade, people thought we were the perfect couple. We broke up before starting high school, but I watched him from afar. I hoped Robert would want to play with us. He knew we could play, but he joined a group of the older guys, men I didn’t know.

We won the first game, surprising everyone in the gym, including ourselves. Then we won the next. We were in better shape. We were quick. We snatched steals and made our lay-ups and even when we missed it was okay because we were winning by four or five. We laughed as we ran up and down the court. It had been a while since we’d won. We were coming off of a long losing season of basketball. It felt good to win, to dominate the court even though we were young, and small, and girls. We held the court.

After our third win, we were waiting for next when Robert started talking with one of my teammates. She stormed off the court and didn’t say a word to me. I glanced around the gym and saw the men looking at me sideways. Robert walked toward me as another game started on the court: a game without us, without the winners.

Robert motioned for me to follow him out of the gym. I grabbed my keys and water bottle. I sensed I wouldn’t be coming back.

“They asked you to leave.” Robert said as we stepped out into pale spring sunshine. “They say it’s because you aren’t Mormon.”

I felt tears welling up in my eyes. I turned away. Robert was still a great shooter, was still a good guy, I thought. I loved him in the eighth grade and maybe I still did, but he never seemed to forgive me for breaking up with him. He went to the rival high school; he was Mormon so things would never would have worked out between us even. Yes, we had much in common for this small town where we were both born and raised, but the differences were mounting.

“You know it’s not that,” I said, my voice betraying me with a quiver.

“Well, yeah, it’s also all of the laughing. It’s just not what they want in their gym.” I looked at him, studied his handsome face as he made excuses for these men. And then I wondered if he agreed with them. “Come on, Nor. Sometimes you just have to take it easy.”

Robert shook his head. “I don’t know. Maybe both.”

But by the time I got home, I’d recovered. I’d done nothing wrong, and I hoped those men who were still playing in their all male, all-Mormon game felt bad. I hoped Robert felt bad, because when I told the story later that day, later that summer, and for the rest of my life, I told it with pride. 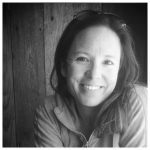 She is committed to writing thought-provoking creative non-fiction, fiction, and poetry. Publications include two book-length memoirs: Through Eyes Like Mine and Overdue Apologies, and excerpts, essays, and poetry in Lady Liberty Lit, Catapult, Meridian, Compose, Kartika, Hippocampus, The Rising Phoenix Review, and Linden Avenue.