My roommate took off right before I lost my job at the pizza place. The only thing he left behind was a note that read, “Moved back home.” If only the unpaid rent had been attached to it.

I sit at the wobbly kitchen table, gazing at the floating dust particles that you can only see when the sunlight shines in at the perfect angle. Sometimes, you have to convince yourself that they aren’t old skin.

The air conditioner moans, as if irritated that it has to work so hard. I haven’t left the apartment in four days, for fear that the hellish temperature might melt away my spirit even more. Is a heat wave really a heat wave if it doesn’t end? I gulp down the remainder of my orange juice. The pulp sticks to the side of the glass. It always bothers me when that happens.

As I stand up to put my head in the freezer. The air conditioner suddenly goes on strike in silent protest, and the refrigerator releases a final gasp. I walk across the room and flip the light switch. Nothing.

There’s a knock at the door. I peer through the peephole. It’s the lady with the beehive hair from across the hall. I crack the door open.

“Is your power out?” she asks.

“It must be the whole building,” she says.

“Maybe the whole city,” I say.

“The food in your fridge will go bad after four hours,” she says.

I’d take that information to heart if I had any food in the refrigerator.

When the power goes out, it’s amazing how all of your habits remind you that you’re nothing without it. The TV isn’t going to turn on, and your phone isn’t going to charge.

There’s another knock at the door. It’s the guy from downstairs who exclusively wears jorts. “Do you want a new roommate?” he asks.

He nods his head to the left. I glance down the hallway and see a scraggly, black cat with a patch of white fur on its chest.

“It was out lying in the sun,” the guy says. “Looked a bit overheated, so I let it inside.”

Before I can say anything, the cat walks through the doorway and rubs against my leg.

“Catch you later,” the guy says.

I fill up a bowl with some cold water and set it on the floor. The cat dashes over and drinks furiously.

At least water is free, I think to myself. Kind of.

I head into my dingy bedroom and grab the coin jar off of my dresser. “This should be enough to get you some food,” I say.

I step out the apartment door and look back at the cat.

“I think I’ll call you Blackout.” 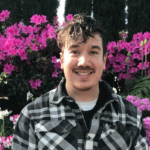