In All Honesty
by Kim Venkataraman

Maybe it wasn’t the accident that planted the seed, although later that’s how she’d think of it. But it wasn’t an idea that grew and developed over time. No, it was as if at the moment of impact—when metal and glass exploded—Liz understood exactly how things would unfold.

Sean’s comment, forgotten now, had them all laughing in the easy way of two couples out for dinner on a warm summer night. As their car stopped at an intersection, a red convertible pulled up next to them. Later they’d all remember admiring the car, but Liz was the only one who said she’d known—even before anything happened—that something was not quite right. The four of them were still laughing when a truck slammed into the back of the stopped convertible, pushing it forward into the intersection.

“Oh my God,” Liz said, maybe the others did too. And in that moment the evening changed, although in all honesty, it was different already. On the surface it was like many of the Saturday nights in the last few years. They’d met at Beth and Sean’s condo and had a beer on the deck while they debated where to go for dinner. Eventually they narrowed it down to either the steakhouse or the Thai place, finally leaving with a plan to decide in the car. Liz and Beth had been roommates in college, and Sean and Tom both worked at Sun Life. And while Liz and Tom had started dating first, by the time the two couples had moved into apartments near each other, there were so many ways their lives were intertwined they almost couldn’t remember who knew each other first or how they’d all become friends.

But this night was different. They hadn’t been out together for more than a month. The reason was something they all knew and yet it remained unspoken. Separately they’d talked, but as a group there seemed to be a silent agreement to pretend that everything was normal. Maybe, Liz thought as the evening began, this would be their new normal. In the last few weeks, she’d been thinking a lot about trust and how, in the end, virtually everything depends on it. We go about our lives assuming that bridges won’t crumble and that elevators will stop. We fill a glass at the sink and trust it’s safe to drink. But, yet, we know that airplanes sometimes do fall, and when we’re in our cars, sometimes the driver behind us doesn’t stop. So if it’s all about trust, what do you do when you don’t have it?

The trunk of the red convertible had been crushed, although the rest of the car looked unchanged. The silver-spoke hubcaps sparkled in the light from the streetlights; something Liz thought was odd to be noticing even as it occurred to her. As the four of them watched, the driver of the pick-up truck put it into gear and looked back over his shoulder. The truck reversed about thirty feet, its brakes screaming as it came to a stop. The whole time the man and the woman in the convertible sat stiffly in their car, staring straight ahead.

In the moments before the truck began moving again, Liz had time to consider what was happening. Maybe the truck’s brakes had failed? Maybe the driver was drunk, or maybe he was going to take off? But even before the truck began accelerating, she knew that what was happening was about love and betrayal and someone wanting to hurt someone else. For a second time the pick-up rammed into the back of the convertible. This time the truck wasn’t going as fast, but the sound was still shockingly loud, and the convertible was pushed a few feet further into the intersection. The truck looked as if it was wedged into the red car’s trunk, and for what seemed like minute after endless minute, the vehicles continued to sway from the impact.

“Oh my God,” one of them said. Maybe they all did.

When another car pulled up behind the truck at the intersection, Liz was reminded that what they were watching was real, not a scene from a movie. The pick-up truck was now blocked in, and she watched the driver, waiting for him to get out of the truck or go crazy and pull out a gun. She felt pressure in her throat, as if she was going to throw up. She glanced at the convertible’s occupants, who still sat immobile in their car, and then at the traffic light suspended above the road.

“Green…the light’s green,” she said, choking on the words.

And as they pulled away from the intersection, they sat in stunned silence. Liz tried to decide whether she dared to turn back to see what was happening.

“Wow…what the hell was that?” Sean said. Which is what they were all thinking, but it was also how Liz knew that their marriage wasn’t going to survive. There was only so much pretending that any of them, especially Beth, should be expected to do. Sean turned west on Route 9 as if he knew, or had decided, where they were going.

“You know, honestly, I’m not really that hungry,” Liz said.

Tom reached across the backseat for Liz’s hand. “Yeah, why don’t we just call it a night?”

Sean nodded silently and, at the next intersection, turned to go back home. The tension in the car grew as they rode the rest of the way in silence, each of them knowing that, in all honesty, sometimes there’s no such thing as a new normal. 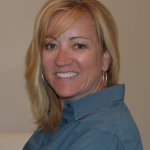 Kim’s short stories have appeared in The MacGuffin, Midway Journal, Redivider and others. She recently completed a novel, “Enough”, based on her grandfather’s experience of being orphaned at the beginning of the depression.