A Sleuth of Bears
by John Brantingham

Martin’s grandmother wakes him on the day he’s supposed to leave for college by shaking his big toe. “Martin,” she says. When he doesn’t open his eyes, she yells, “Marty.” She slaps him on the leg a couple of times too, something she hasn’t done in the long months since he graduated from high school.

The sentence doesn’t make sense, but he gets out of bed and follows her into the kitchen. Sure enough, a bear is in the backyard snuffling near the trash cans. He must have come down the alley and slipped over the chainlink fence. Maybe he was driven out of the foothills and into the city by the lack of water this year, and there are fewer blackberries or whatever it is they eat.

“It’s a killer,” she says. There’s terror in her voice, but it’s the same sham terror she gets when Martin stays out late with his friends. He’ll come home, and she’ll be awake and weeping emotional blackmail.

“No.” Martin points across to the other side of the house. “It’s a whole group of them.” Two others are over on their own near the kiddie pool that’s become a mosquito farm in the tall weeds.

“What more do they want?”

“I gave them the leftover Chinese food and a frozen pizza, and they still want more.”

She gets that addled face again as though she actually believes this was a good idea. “Grandma, you can’t do that.” He says it as though he’s scolding a child, as though she doesn’t know it already, as though this isn’t just her game.

“No?” For a second, he wonders if she is actually delusional. Her face his weak, slack-jawed. Her skin seems be sagging and graying. “But if they eat a whole pizza, I mean a whole pizza, they should be full and leave.”

He wants to tell her to drop the stupid act, but he can’t do that to this woman who has given him a place to live these last five years. “You can’t feed bears.”

She doesn’t answer except to shake her head as though his words don’t mean anything. “Can’t you see that I need you?”

She reaches out and touches his face with her finger. “Honey, I don’t think I can live in this world alone.”

Martin turns his head to the ceiling and sighs heavily.

“Do you know what kind of labor I went through for you?”

“I was in labor for 16 hours. The doctor told me he’d never seen pain like that before. Your father left me the night you were born. He never said why, but I knew it was because he wanted a son.”

Her eyes have gone glassy with a lifetime of frustration and loss.

With that, she seems to snap back into the world. She blinks, and her mouth tightens.

In that second, he gives up on his dream of San Francisco. It’s too late to register for a university in Los Angeles, but he supposes there is always community college.

His grandmother starts to cry in a cinematic wail. “Fine,” she says. “Fine.” She stands up out of her chair and stomps into the backyard. The bears, all three of them, turn their heads to her. “Eat me,” she yells, and she steps forward with her hands raised. “Eat me, god damn you.”

For a moment, Martin flashes on San Francisco, the life he could have there, and his breath catches in the far flung hope that they will devour this woman before she consumes him. Then his grandmother screams, “Eat me,” and steps forward, and the bears hop over the fence in a terror of humans that has been bred into them over the last ten thousand years. He can see into his faraway future, how he will pay for that fleeting hope for her death with a lifetime of compromises and a wish that will ulcer his stomach through.

For now, however, he simply has this woman, standing in the mustard grass of the backyard, weeping and stomping Chinese food boxes as the bears flee her in a way that makes Martin jealous to his soul. 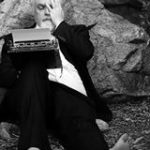 The Best Small Fictions 2016. He has seven books of poetry and fiction. He is currently working on a collection of flash fiction pieces with Grant Hier that covers the entire history of California, and he teaches poetry and fiction at Sequoia and Kings Canyon National Park and Mt. San Antonio College.