The text from my sister flashed on my phone: I need to talk to you. But I’m scared.

I texted back: Will call in 10 mins. It would have to wait until my husband and I put our two-year-old down for the night. Why would she be scared? Puzzled and concerned, I hurried through the rituals ending in hugs and kisses. Maybe Robin had broken up with her partner or regretted her new career track?

Three years before, our dad was diagnosed with cancer, and I’d gone through my leukemia ordeal just a year before. They say bad news comes in threes. Had Robin now received terrible medical news in 2012?

Once we wrapped up the bedtime goodnights, I rushed to the living room and anxiously called my only sibling. Robin picked up on the first ring.

I began with our familiar salutation: “Hello, my sister.” Silence greeted me on the other end. “So,” I eased out, “What’s up?”

The quiet lasted so long, I wondered if the line had gone dead. I glanced at the face of my cell to be sure we were still connected. At that moment, I heard my sister stutter-start. She cleared her throat and said softly but matter-of-factly in my ear: “I’m transgender. Do you know what that means?”

It was my turn to pause. I wanted to observe, feel, and process, as was my meditative nature. With a slow syllable, I answered yes. I knew transgender was the “T” at the end of the acronym LGBT. I sensed the need to focus on “transgender” with which I had no personal experience, especially because I’d lived and worked in southeast Virginia—a cloistered, rather homogenous region—the first ten years of this century. It was going to be a steep learning curve.

To ground myself, I pressed the four corners of my feet onto the laminate flooring beneath my chair. I waited for Robin to fill in the gaping holes of my knowledge. When a close friend came out to me as gay after college back in the 1990s, he said I’d come across as nonchalant, which damaged our relationship. I knew the way I reacted to my sister’s news could make or break our close bond. This was not your everyday conversation.

I had questions—some philosophical, others, practical. What did her partner, Lesley, think of this revelation? Was I the last to know, just like two decades before when she came out as a lesbian? Would the haters in the world try to hurt her because she identified as transgender? How did she define transgender for her own life? Most important, would she be happier as a he?

We talked, or, more precisely, Robin talked and I listened with occasional conversational noises to let her know I was still with her. At first, some of what she told me that cool winter evening seemed cheesy or superficial. “Chaz Bono is on this season’s Dancing with the Stars.” “I’m now buying ties.” Uneasiness swept over me—what did ties and Chaz Bono have to do with anything? But I continued to listen to that oh-so-familiar voice.

Robin explained the importance of these signifiers.

After living the wild ride as the child of celebrities, Chaz upended everyone’s expectations. Chaz was formerly known as Chastity, daughter of Sonny Bono and Cher, and more than a ballroom dance contestant. He broke out of the confines of the female box ticked on his birth certificate. The newsstand magazines covered it all. As the first openly transgender person scrutinized by the mainstream media, Chaz’s activism on behalf of the transgender community reached the entire nation. He symbolized what could be for Robin.

When she saw the documentary about Chaz’s transition—a story of a boy trapped in a girl’s body—she identified with Chaz’s years of longing to be known on the outside how he felt on the inside. “Watching the documentary was the final validation of what I always knew in my heart and struggled to reconcile throughout my adult life.”

This conversation happened about a year after my blood cancer diagnosis. The five rounds of chemotherapy to get me into remission and keep me there—each of which was administered in hospital 24/7 over eight to ten days—still greatly affected me. I had what people call chemo brain, where a patient’s cognitive abilities to focus and concentrate are diminished. At that point in my recovery, for instance, I couldn’t keep track of the plot of a short story. Even with my medical shortcomings, I listened as hard as I could to the words tumbling at me and absorbed the passion in Robin’s voice during our hour-long talk. The thought of losing me, something Robin had never contemplated, started her questioning everything about her own life. Such profound reflections, she told me, helped bring to the surface her deeply held belief she was a he. Change was coming. And I felt privileged to be one of the first people to whom Robin revealed her truth.

Back in early 2012, when we had that conversation, the nation’s attention was not yet focused on the transgender community as it is today. Orange Is the New Black, with trans actress Laverne Cox, wouldn’t premiere on Netflix for another eighteen months, about the same time Neil Patrick Harris performed as Hedwig at the Tony Awards. It wasn’t until June 2015 that a transitioned Bruce Jenner appeared on the cover of Vanity Fair with the headline “Call Me Caitlyn.” But there was a backlash. In March of this year, North Carolina passed controversial legislation requiring transgender people to use public restrooms corresponding to the gender marked on their birth certificate.

During that pivotal conversation with Robin, my mind wandered back in time. My sister and I shared our childhood in a stable, two-parent home with an academic father and a stay-at-home mother. By the time my blurry toddler pictures appeared in our family’s photo albums, my older sister had her hair in an androgynous bowl cut and wore bell-bottoms. No frilly dresses for her.

Robin developed big breasts by the time she was ten, an awkward addition for any girl to cope with, more so for someone who felt always out of place in her body. I remember going to an amusement park with her, our dad, and a school friend to celebrate my seventh birthday. Robin was twelve years old. On one of the rides, the attendant mistook her for our dad’s wife rather than his daughter. We all laughed at the mistake, but the look of horror on my sister’s rose-tinged face made me worry that my chuckles had hurt her feelings.

In high school, Robin was the only girl to compete in the shot put, which took strength and mettle. She gained so much muscle in her arms and back she split the shoulder seams of her shirts. Though her enhanced physique impressed me, I remember wondering how her friends and others reacted. But what did I know? I was just a self-absorbed junior high school kid wanting to blend into the crowd.

Since her high school days, my sister wore a gender-neutral uniform of oxford-cloth, long-sleeve shirts tucked into khakis or button-fly jeans. By adding ties to the mix in her mid-forties, she was declaring to the world her intention to be viewed as male.

“How did Lesley react to the news?” I asked. The two met in graduate school classes for marriage and family therapy. An insightful woman who had previously been a social worker, Lesley was the best person my sister had ever known in her romantic life. Robin gleefully relayed her partner’s reaction: “Took you long enough to figure that one out.” Lesley recognized Robin’s path before my sister’s inner feelings had harmonized with her outward life.

Over the next weeks and months, I would hear from Robin and read about the transgender movement and community, the jargon used, and some of the medical lingo. Though I missed saying “Hello, my sister,” I continued to feel nervous excitement for what lay ahead.

That evening, after Robin filled my mind with definitions, explanations, and stories, we had come to the close of our conversation. In a teeny voice from far away, Robin asked, “Do you still love me?”

My heart leapt into my throat. I wished then that the conversation had been face-to-face and not on the phone. I needed Robin there to embody all those memories. “You are my one and only sibling, the first person I ever smiled at.” I struggled for the right words and finally found them: “I love you unconditionally.”

Time has passed since that conversation. I’ve celebrated five years cancer-free, Rob and Lesley are still going strong, and our sibling connection is as deeply felt as ever. Most important, Rob is a joyful living soul as a he. 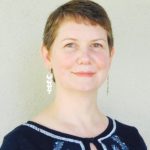 Erin Michaela Sweeney is a writer, mommy, yogini, daughter, editor, sister, and napper extraordinaire who lives in Claremont, California. She connects with readers via her newsletter, Twitter, and Facebook.